What are Age spots?

Liver spots are not in any way related to the liver! They occur as a results of UV exposure. A study of age spots on the face and back found that the spots are strongly linked to cumulative UV light¹.

The majority of people over the age of 60 years with Caucasian skin have age spots. The lesions start to develop from around 40 or earlier depending on past UV exposure and skin type.

Ultraviolet light exposure from the sun increases activity of the pigment-forming melanocytes in the upper layer of the skin (epidermis).

In the winter, Age spots remains pigmented whereas freckles become lighter in the absence of continued UV exposure.

A Liver Spot is normally a flat, brown (often light brown) mark with a well defined and often irregular border. Age spots may vary in the amount of pigment and some are almost black. They may also be slightly raised. They occur on sun exposed areas such as the face, scalp, neck,  back of the hands and upper chest.

How do I know it’s an age spot and not a mole?

I’m just 20 years of age and have lots of these!

There are other types of lentigo other than solar lentigo. The simple lentigo is a lentigo that may occur in large numbers in people with a light skin type, or red hair.

Simple lentigo develops in childhood and as a young adult and tend to reduce in number as you get older. They are smaller than solar lentigo, around 3-5mm in diameter. Unlike solar lentigo that tend to occur on the backs of the hand, forearm and face, simples lentigo may occur anywhere and are not sun-induced.

A very small number of people with numerous simple lentigo (also called lentigo simplex) have a hereditary condition called Peutz-Jeghers Syndrome. The spots of Peutz-Jeghers syndrome also occur inside the mouth. The condition is linked with benign vascular growth inside the gastrointestinal tract. These hamartomas may bleed and cause anaemia.

Solar lentigo has a well defined border and is one shade of brown. 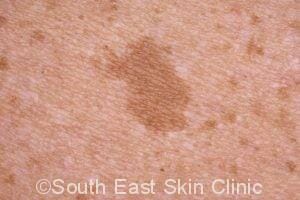 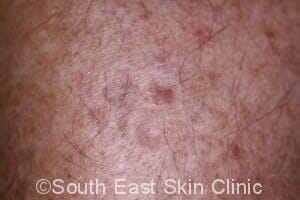 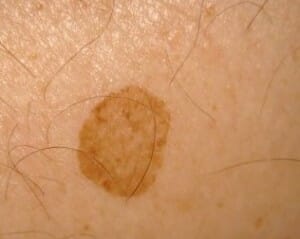 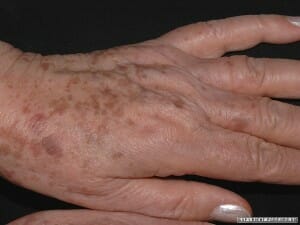 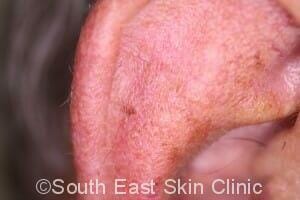 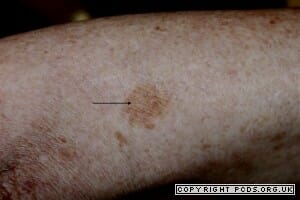 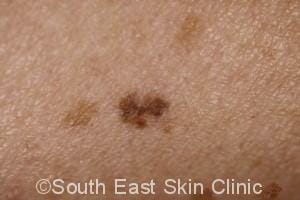 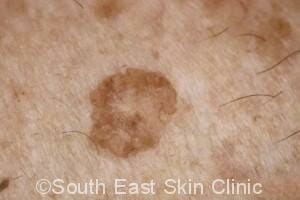 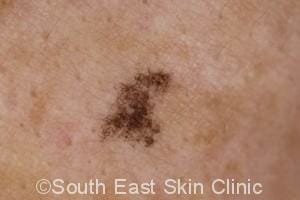 What is the best treatment for Age spots?

Which is the “best” cosmetic treatment depends on the number and size of lesions, location, as well as cost and convenience of treatment.

Cryotherapy is often used first line – the pigment-forming cells (melanocytes) are killed at around -5ºC whereas other types of skin cells (Squamous Cells) are killed at lower temperatures (-20ºC). Therefore a light freeze is usually enough to lighten the age spot.

Age spots are one of the most common ‘good lesions.’