A type of harmless mole that is dark in colour and may look like a melanoma.

What is a Blue Nevus

A blue nevus is a type of mole (nevus) where the pigment is deep within the skin (dermis) so that the pigment appears blue or blue-grey.

The mole normally appears from later in childhood – but not later than 40 – and remains throughout life.

They are more common on the backs of the hands or feet, the lower back, and the head & neck. Blue nevus may, however, occur anywhere on the body including the face.

A blue nevus is usually raised in the shape of a dome & the colour is dark blue to almost black.

Occasionally, a melanoma may look similar to a blue nevus (See photograph).

A dermatoscope examination will likely confirm that the lesion is a blue nevus but on occasion a biopsy is necessary.

A blue nevus should be positively identified every time as a blue nevus and not a melanoma. 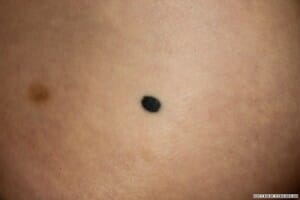 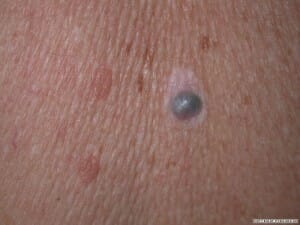 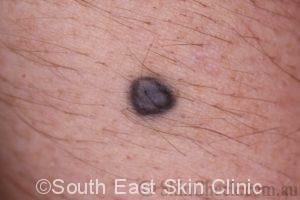 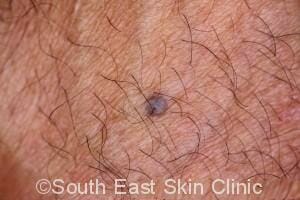 What is the Treatment for a Blue Nevus?

No Treatment is required. The lesion may be removed surgically where there is concern about the nature of the lesion or cosmetic concerns.

The benign proliferation of melanocytes form in nests – as they do for other types of naevi (moles).

The melanocyte nests of the blue naevus are, however, found deep in the dermis. This gives the moles a dark blue colour.

There are different types of Blue Nevus that are identified by a pathologist. It is not possible to distinguish the different types without a biopsy. However, biopsy is only required in limited circumstances, usually to exclude a melanoma or when dermatoscopy does not allow a confident clinical diagnosis of a blue nevus.

Cellular blue nevus is a less common type type of Blue Nevus identified by the pathologist.  The cells are more abnormal.

Cellular blue nevus is often more nodular (raised) than a common blue naevus, and may be larger (eg. 1 to 3cm in diameter). They may also be found sometimes on the backs of the hands or feet but are most often found on the lower back or buttocks.