A combination of two types of mole.

What is a combined nevus?

A combined nevus is a blue nevus combined with a normal brown mole (nevus), and is made up of these two different populations of cells.

Combined nevus looks like two moles in one – the blue nevus with the brown nevus (mole).

What is the significance of a combined nevus?

A combined nevus is harmless but a melanoma may look similar. A confident diagnosis of a combined nevus with dermatoscopy will rule out the need for a skin biopsy. The outcome of the assessment will be one of three:

What does a combined nevus look like under a dermatoscope?

A combined nevus will typically have a blue centre and be surrounded by brown blotches and/or a lace-like brown pattern (reticular pattern). The blue centre represents a blue nevus, and the brown area represents a congenital mole. There may sometimes be smaller multiple blue blotches rather than a single large blue area.The classical dark blue centre and brown periphery has been described as a “Fried egg nevus.”

When the blue area is off-centre, there is dermatoscopic chaos in the lesion, or the nevus is new in an adult no longer developing new moles,  then a biopsy may be necessary to exclude a melanoma. 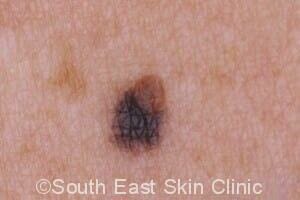 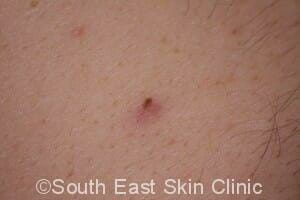 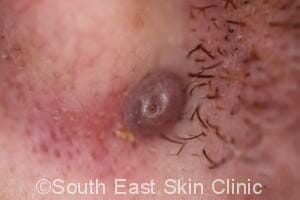 A type of mole of which there are many different types.