What is a keratoacanthoma?

keratoacanthoma (“KA”) is a benign tumour of the sebaceous gland that starts as a red or skin-colored spot and and grows rapidly over weeks. They usually grow to between 1 and 3cm in size by which time it usually has a central crusted plug.

A Keratoacanthoma is a fairly common finding at a skin check although most people are aware they have a growth of some sort.

KA can occur at any age but is slightly commoner between the age of 50 and 59.

Eventually, most Keratoacanthomas turn into scar tissue but this may take years. It is generally not considered safe to “wait and see.” The rationale for removing a Keratoacanthoma are:

It’s almost impossible to be clinically certain that a KA is not an SCC – the appearances are very similar even with a dermatoscope.

This could easily have been an SCC, pathology showed a Keratoacanthoma on the back of the wrist 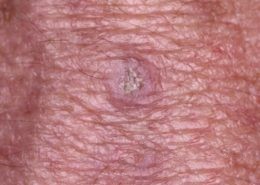 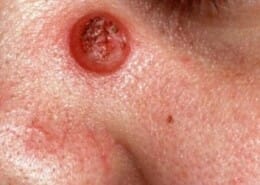 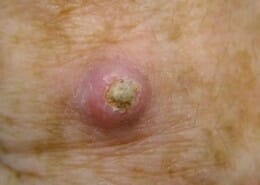 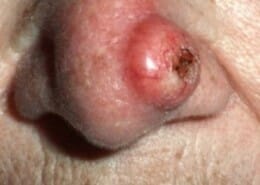 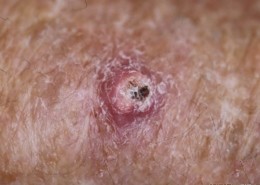 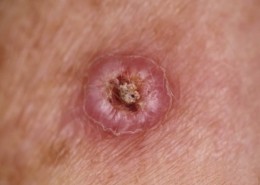 How is a keratoacanthoma treated?

Other treatment options may be considered (depending on the circumstance & discussion with the patient) such as curettage and cautery. However, curettage will need to performed deeply in order to ensure the whole depth of the lesion is treated. This wound may take many weeks to heal, another reason why formal excision is usually preferred. Medical treatments include injection of a chemotherapeutic agent.

There are some of the key terms that may be found in the pathology report.

A keratoacanthoma & Squamous Cell carcinoma may look similar – at first glance – to the pathologist. It is helpful for the pathology specimen to include the base of the lesion.

Keratoacanthoma typically has a central core like a Volcano. You can see this in the photos. This core consists mainly of keratin.

The keratinocytes (the main skin cells normally found in the lowest layer of the epidermis) look fairly normal. They may contain “glassy eoesinophilic cytoplasm” – these are pale glassy coloured cells.

In practical terms, KA is generally thought of as a diagnosis for the pathologist.