What is Merkel Cell Carcinoma?

MCC is a rare, aggressive skin cancer with just 1.6 cases per 100,000 people in Queensland. MCC is 2.5 times more common in males than females, and is most common in individuals over 70 years of age. Only 5% of cases occur under the age of 50 years. MCC is being diagnosed 3 times more commonly than 20 years ago because of cumulative sun exposure, an older population, and greater use of immunosuppression.

How is the diagnosis made?

A typical presentation is with a rapidly growing, raised, red or reddish-purple nodule. However, the appearance of Merkel Cell carcinoma is not specific.

MCC is most commonly found in:

Most skin cancer doctors and dermatologists will never see a case of merkel cell carcinoma. However, MCC should be considered as a possible diagnosis for a rapidly growing nodule on the head or neck, in an elderly man or immunosupressed individual.

The diagnosis is made by the pathologist after a skin biopsy. MCC is made up of ‘merkel cells’ which are blue in colour. Special Immunoperoxidase stains are used to confirm these cells.

UV light is an important risk factor. The condition is more common in areas with a high UV index, and is usually found on sun-exposed areas.

Immunosuppression is also an important risk factor for merkel’s carcinoma which helps to explain why the condition is most common over 80 years of age. There is also an association with advanced HIV, organ transplant or leukaemia.

A skin cancer doctor may make the diagnosis. However, MCC requires treatment from a variety of specialists including a surgeon and oncologist.

The typical treatment is therefore surgery combined with radiotherapy. However, radiotherapy may be appropriate on its own when surgery is not indicated. 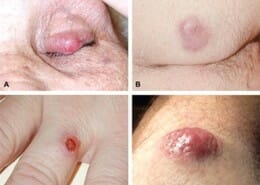 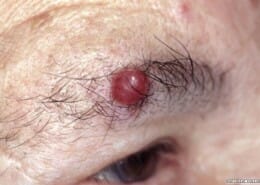 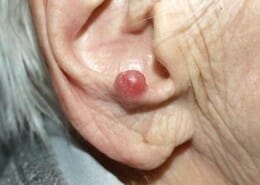 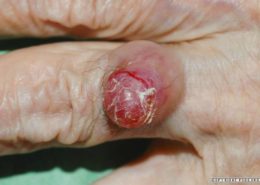