Melanoma of The Nail Bed. 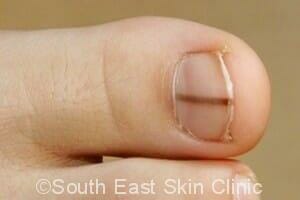 What is nail melanoma?

What are the other causes of Longitudinal nail pigmentation?

The most common causes are benign moles, trauma and ethnicity.

What are the signs of a nail melanoma?

The pigmented area is brown to black. The pigmentation of melanoma may spread onto the cuticle (that strip of hardened skin at the base of the nail) – this is called Hutchinsons Sign but may be absent

How is Nail Melanoma Diagnosed?

Concern regarding the nail should lead to a detailed look with dermatoscopy. The ultimate diagnosis can only be made by histology and this involves a biopsy of the nail matrix. Therefore, dermatoscopy is particularly useful to help avoid nail matrix biopsies.

How is dermatoscopy of the nail performed?

A gel is used to interface between the dermatoscope and the nail. The dermatoscope is switched onto the “non polarized” light setting and the nail examined. Under a dermatoscope, the colour of the pigment can be much better distinguished. In simple terms, melanomas or moles are brown or black whereas the other causes are more likely to be grey in colour. Dermatoscopy may also show the lines as being made up of several  different colours and separated by varying distances. The lines of a benign nail mole are usually of the same colour and the lines a similar distance apart. Hutchinson’s sign may also be revealed only with dermatoscopy.

It can be very difficult, even with dermatoscopy, to exclude melanoma from a traumatised nail. In these situations, the trauma creates brown lines on the nail (both from bleeding and inflammation that occurs during the healing process) and may look concerning enough to indicate the need for a biopsy.

Nail melanoma is the main reason that you are asked to remove your socks at a full skin check.