Sunspots are uiquitous in Australians over the age of 40.

What is Solar Keratosis?

Solar Keratosis are known as Sunspots. These rough scaly lesions on the backs of hands & forearms, face & forehead are very common in Australia!

How do sun spots form?

Sunspots can be thought of as the skin-equivalent of being overweight in that Sunspots:

Solar keratosis is almost to be expected if you were brought up in Australia, have fair skin, and are over the age of 40 to 45. In fact, Sunspots affect around 80% of people by the age of 60¹.

Why do sunspots matter if so of us get them?

Because of the risk of transition of Solar Keratosis to Squamous cell carcinoma, areas of solar keratosis are therefore generally treated. The precise risk of a specific untreated Solar Keratosis developing into SCC is not known for certain. One figure from a study suggests that there is a 10% chance that a person with 7 to 8 untreated Solar Keratoses will go onto to develop one SCC within 10 years. Research suggests that 60 to 80% of SCC arises from solar keratosis.

Some Solar Keratoses may go away on their own without any treatment other than good regular sun protection.

The typical solar keratosis will be a red flat scaly area on the back of the hands, forearms, face or scalp (in men with hair loss). They are often better felt than seen. A sunspot is usually less than 1cm in diameter although sunspots may be grouped together as an almost continuous area of ‘field change’ that reflects an area of UV-damaged skin.

The appearances can vary hugely.  There are different subtypes depending on their clinical appearance:

Classic Solar Keratosis (as described above – flat, scaly and red). Need to differentiate from an IEC.

Hypertrophic Solar Keratosis  – These are raised from the skin (sometimes markedly raised) and covered with a thick scale on a red base. These can look similar to SCC.

Cutaneous horn – These are thin hard lesions that project up from the skin and are quite firm and often dark. Hence the term ‘horn’ which may also be caused by SCC or a viral wart.

Pigmented Solar Keratosis: found most commonly on the face and can look like a melanoma.

Actinic Cheilitis: Solar Keratosis on the lips. More common on the lower lips.

A dermatoscope may be needed to examine the lesion closely to help confirm that the lesion is a Solar Keratosis and not a skin cancer or alternative diagnosis. When there is doubt then a biopsy will be required.

What is the treatment for Solar Keratosis?

Treatment may be targeted to individual Sunspots, or to a whole ‘field’ such as the face, scalp, forearm and/or back of hands. Treatment of a whole field will reduce the risk of solar keratosis appearing in those adjacent areas in the future. When in doubt, it’s generally best to treat a whole field.

Have you seen someone walking around with a crusty red nose, cheeks, forehead and/or temples? Most likely they are having field treatment for Solar Keratosis.

There are over ten different treatment options available. To cut to the chase, the most widely used treatments are efudix and cryotherapy.

Physical treatments may be used to treat individual Solar Keratosis or whole field:

There are other topical therapies for mild solar keratosis

Regular use of a moisturizer is helpful.

Surgical treatments may be used to treat more isolated lesions:

Many regular attendees of a skin cancer clinic are familiar with Cryotherapy (freezing). The issue with cyotherapy is that it does not treat a whole field. Efudix cream, on the other hand, does treat a field but usually involves several weeks of red and inflamed skin. Aldara and Picato gel are limited by the amount of skin that can be treated at a time. None of these situations are ideal which is the reason why people often choose PDT. However, PDT is still a expensive.

Most prescriptions for Picato® gel & Aldara® are on a private prescription because PBS (Medicare) requires that the treatment is restricted to the face or scalp, and that other standard treatment is ‘inappropriate.’

Solar Keratosis may be difficult to control in some people. The starting point at home is moisturizer, sun protection and Vitamin B3 500mg twice per day.

Treatment of Solar Keratosis is worth the effort because of fewer sunspots and less skin cancer in future. Solar Keratosis of the Forehead – though extremely common in older Australians, around half of Australians over the age of 40 have at least one sunspot. 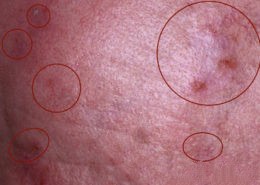 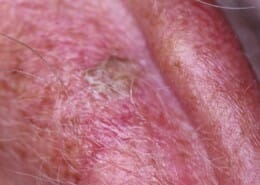 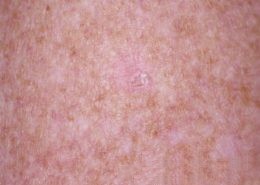 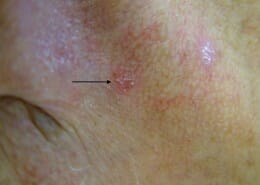 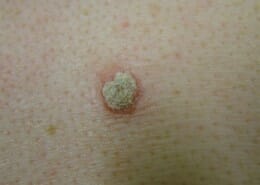 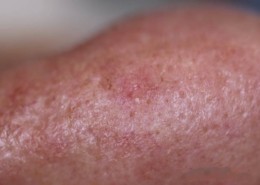 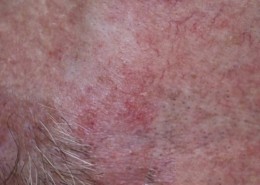 Treatment is usually based on clinical appearance. On occasion, a solar keratosis is surgically removed.

These are some of the key terms that may be used in the Solar Keratosis pathology report.

The keratinocytes are the cells found in the base of the epidermis.  Atypical Keratinocytes look abnormal (the cells are large and pink) because of UV damage. This is why some lesions, left untreated, would have gone on to develop IEC &  SCC.

Dysplasia indicates that the cells are abnormal – the cells in question being the Keratinocytes. There is a continuum of dysplasia with mild dysplasia, moderate and severe dysplasia on the one hand and actual skin cancer on the other (IEC  or SCC).

Keratinocytes produce keratin. Excessive production of keratin leads to a scaly thickened epidermis and this is called abnormal keratinisation. The scale may become thick in which case it will be obvious when you look at the lesion – the scale of a “hypertrophic” solar keratosis can almost be picked off. Very thick lesions are called cutaneous horns and project upwards from the skin as a hard scaly nodule.

When you look at the evidence, this is simple. Good Quality Sun Protection will considerably reduce the risk of further Sunspots developing, and of course reduce the risk of melanoma and other skin cancers. In terms of Sunspots, The seminal Nambour Study² really should be more widely known. This is an old study simply because it would be unethical to repeat.

There were 588 participants in the Nambour study. Each participant lived in & around Maryborough. At the beginning of the study, each participant had between 1 and 30 Sunspots. They were each asked to put on a cream once every morning, with “approximately 1.5 ml to the head and neck and the same amount to each forearm and hand once … and to reapply if necessary during the day.” (Bear in mind that modern sun protection advises 3mls on each of these body areas with very frequent re-application).

Half of the participants used sun protection 17 sunscreen, and the other half used a sham-cream. They didn’t know which they were using.

And the results? After 7 months, those using the sunscreen had, on average, 0.5 fewer Sunspots whereas those who used the sham-cream had 1 extra Sunspot.

The Nambour Study gave great results even with very conservative use of sun screen compared with modern sun protection advice!

Sun Spots – a fact of life for many Queenslanders.